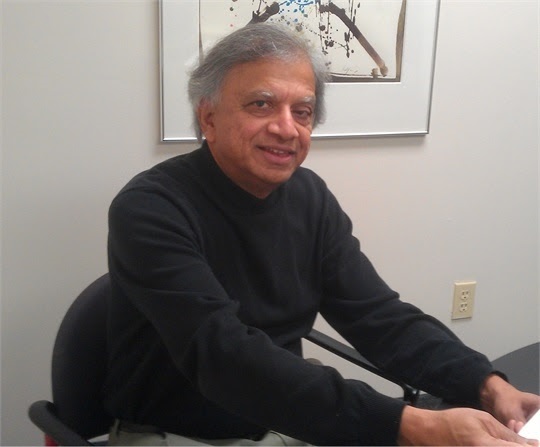 Growing up in India, Mukund had limited career choices: engineering or medicine. He did not want to pursue medicine so by default he chose engineering. Because his Dad had a construction company, civil engineering was the automatic choice so he could join the family business. When he finished his engineering degree, a close friend persuaded him to apply for higher education in US. Although his primary interest was not to pursue further education in engineering, he decided to follow his friend’s suggestion and applied to various universities in the US. His friend told him “once we’re in the US, we could see Pink Floyd”, which was the true reason for wanting to come to the US.

He was accepted to Cleveland State University and arrived September 1972 in cold Cleveland. He finished Graduate School and after working at various companies as a structural engineer, he began to realize that he needed to make a change. When he came home from work, he was more interested in financial magazines, such as Money and The Wall Street Journal, than engineering books. The need for a career change became more urgent after his marriage in 1978, and even more serious, after their first son, Gautam, was born.

One evening, an insurance agent made a visit and he was presenting life insurance proposals. Mukund was impressed with the agent and his approach, which planted seeds in his mind about doing something similar. He had an interest in the stock market and how investing worked, so he contacted a broker with a company called Prudential-Bache Securities. He would spend time in the broker’s office learning the system, and he also signed up for evening educational programs hosted by other brokers.

It was now time to take the leap. He started looking for opportunities to get training in the field of financial planning. Two different companies offered him interviews, but he liked the approach of IDS – as more diversified and not perceived to be a one-trick pony – so he decided to join them. (IDS eventually became American Express Financial and finally became what we now know as Ameriprise.) There was no salary with this company and not enough to pay his expenses, but he had saved up enough money to take the chance. Soon his commitment and hard work began to show results and after acquiring a few clients, he started to get many referrals. Within two years and seeing his success with clients, IDS asked him to consider being a trainer and a manager. After four years with IDS, he started feeling he was not truly independent; instead of understanding the client’s needs and finding the best solution, he was instead limited to recommending only investments offered by IDS. He felt it was now best for him and his clients to go out on his own. He had verbal support from a few accountants and attorneys, who confirmed that, although they liked him, they resisted referring clients because of his inability to be truly independent. He always remembered his Dad's statement that he should be always be his own boss.

Mukund informed all his clients that he would be leaving IDS and that clients would be assigned another advisor. But clients chose to continue working with Mukund. He now needed to come up with a name for his company. He liked IDS’s Four Cornerstone philosophy, which preached balance like a four-legged stool. He chose the name Balanced Financial Concepts because Four Cornerstone sounded long and clunky. He registered the name with the State of Ohio and Balanced Financial Concepts was born in October 1987.

Based on his suggestion, his clients moved their investments to cash for safety while he set up his company. On October 19, 1987 (Black Monday), the stock market experienced one of the worst days in history, dropping more than 20% in a single day. Mukund’s suggestion for his clients to move to cash short-term proved to be timely and he felt that Grace had a hand in it.

His first office space was shared with his accountant. He hired his first assistant to help him manage his time effectively. In 1991, Balanced Financial Concepts outgrew the shared space and needed its own, which luckily opened in the same building where the office still is.

Mukund attracted clients through referrals, which lead him down a path he never would have imagined: one client was the tour director for Pink Floyd, and Mukund met the band shortly after.

And the rest, as they say, is history. 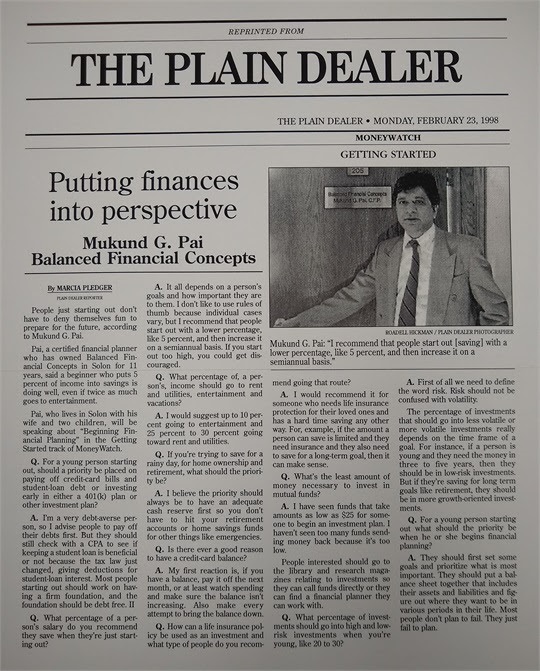 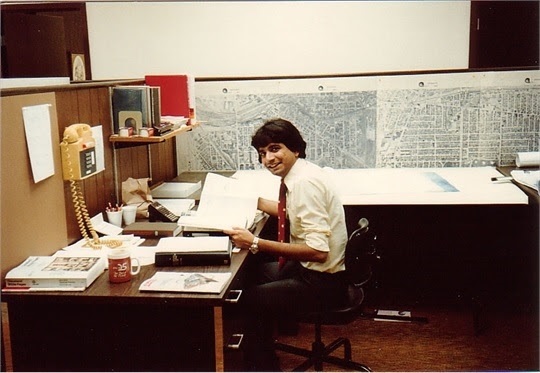